The Pain Points of Haskell: A Practical Summary

Changes have been made as of 2020-06-09 to reflect new information about Cabal.

I would like to preface this article by saying that Haskell is great. I have been using it as my go-to for native applications for several years now. Everything that follows is a product of my love and affection for the language, and a desire to see it succeed. And none of this is intended to disparage the efforts of people improving the Haskell ecosystem. It’s hard work and there’s a lot of it, and I thank you all for what has been done so far.

That said, I will not be pulling any punches here.

As of now, there are a number of pain points which frequently occur when using Haskell. These are a product of my own experience and that of some of my good friends at varying levels of Haskell education and practise. If you are an intrepid Haskeller, some or all of these will already be known to you. I would like to lay them out here for a couple of reasons:

If you just want the skinny, check the very end for a shorthand version of the article. 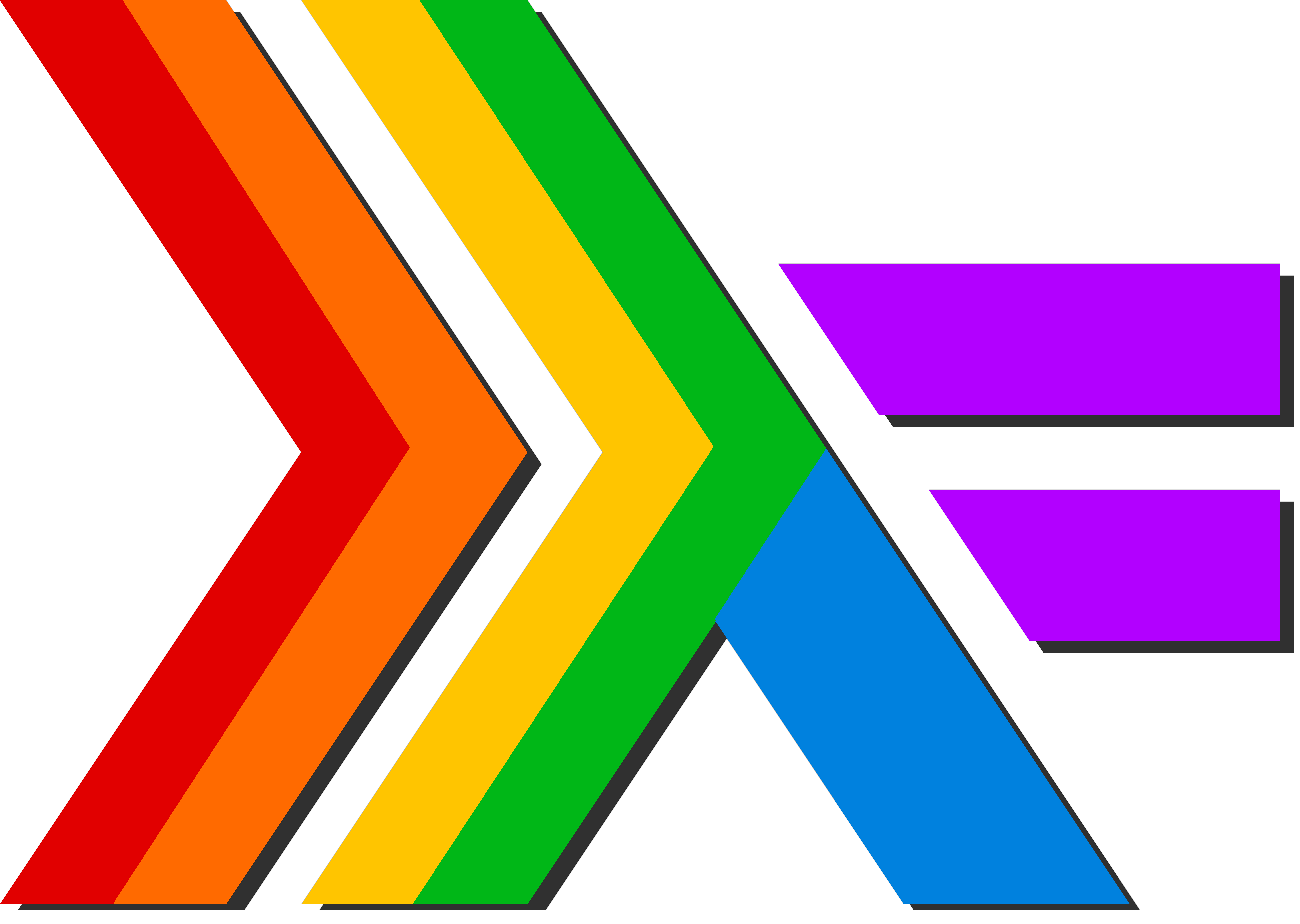 Contrary to popular belief, there are multiple Haskell compilers. Even so the vast majority of application code is written with the GHC compiler firmly in mind. There are good reasons for this. The most critical is that GHC has the most money and time invested in it, and as such moves faster to accommodate new concepts than other compilers. Almost all production code initially written for GHC will not work with any other compiler, owing to the inclusion of language pragmas such as TupleSections, RecordWildCards, OverloadedStrings and so on. This itself is not a pain point though; Haskell.org simply proposes to download GHC. (Except on Arch Linux, which is a whole other kettle of fish).

The problems start after downloading GHC. At time of writing, thirty years after Haskell 1.0, there is no bespoke Haskell IDE. There is no featureful Haskell plugin for any major text editor which can be installed without command-line intervention1. Either of these things alone would be somewhat problematic; taken together, it can be enough to put people off the language entirely. Hard to blame them.

There is hope in this regard. The tooling community seem to have unified on making haskell-language-server the standard. Luke Lao wrote a great summary which I would not be doing justice to summarize here. But it feels pretty rough to tell people “Hey, just go without tooling until we sort this whole thing out”, or “stick with this old version of GHC, it is the one that works”.

For the time being, I suggest people find an extension which integrates only with ghci, such as Simple GHC (Haskell) Integration for Visual Studio Code. The lack of moving parts is a virtue. I also strongly recommend the wonderful tool ghcid which provides live reloading and testing out of the box, again built only around ghci but with integration with stack where relevant.

Cabal is super cool. It is very featureful and powerful, and getting more so with every release.

You know what else is super cool, featureful and helps people write computer programs? git. As a sprawling tool with multiple interfaces for even small tasks, it’s no surprise that git has a million and one books dedicated to working with it in the most practical way. By contrast, Cabal has the Cabal User’s Guide. Unfortunately, the guide doesn’t really do much in the way of guiding. For example, it doesn’t tell you that the preferred way to use cabal in 2020 is with the v2- prefixed commands which are not even introduced until chapter five of seven, roughly forty thousand words into the guide2. Update: Apparently the v2 commands are the default now, but the documentation is incorrect about this point. Also the tool still tells you to use “v2-” versions of commands in command-line output during normal operation.

In my view, the principal reason that many people recommend stack over cabal is twofold. Firstly, the defaults are sensible. If you type stack build, you are doing it right. And secondly, you do not need to know everything about it in order to get it to do what you want. As a Haskell programmer of five years, I am still too intimidated by cabal to use it as my daily driver, and I will reach for stack even for small tasks.

If you are new to programming in Haskell, stack is still the path of least resistance. I look forward to the day that I can say cabal is all we need.

The invention of the monad may be the most important piece of programming language theory of the last quarter century. They are so powerful that a virtual cheer goes up any time another language even imitates their implementation in Haskell. Despite many attempts though, I don’t think we have yet found the best way of explaining what they actually are. The Wikipedia article has quite a good example of non-explanation.

At Warwick University we have a competently designed and taught Functional Programming module for first year students. In the module, monads are introduced as a mechanism for abstracting sequential composition. This seems to be quite effective as a motivator, but it is also hiding a decent amount of complexity. For example, the List monad does not compose sequentially in the way that might be expected. Additionally, the effect composition order is not always defined by the direction of (>>=) (consider the reverse state monad, for example).

Functors can be broadly explained in terms of containers, where fmap modifies the value(s) in the container without modifying the container itself. The container may be structural (in the case of data functors) or computational (in the case of control functors); both of these concepts survive the box explanation. There are similar analogies that can be made for monads, but they all fall apart in some critical aspect. “A monad is like a burrito” is famous for how true it isn’t.4

Hopefully we will find the platonic ideal of a monad tutorial before too long. In the mean time, we will have to stick to teaching by motivated examples.

The introduction of monads to new learners is not the only pain point, however. Friends and colleagues have pointed out that a similar issue arises whenever trying to learn a new library which has a monad at its core.

Very rarely do libraries document the underlying mechanism by which effects are composed. As a result, the user is left guessing at what the core of a library actually does. Even some of the best-documented libraries5 seem to suffer from this affliction.

I implore library writers to define the functionality of their fundamental types upfront. And while we’re at it, please consider documentation-by-documentation as more of a priority than documentation-by-blog-post. The Haskell community is inseparable from the blogosphere (and we have many talented bloggers around, not including myself) but blogs do decay over time. Inline documentation serves as a source of truth, and is found precisely where people first look.

If anyone needs an example of good, readable documentation, even on more advanced topics, I can highly recommend reading some of Alexis King’s libraries, such as Eff.

At risk of sounding like a broken, erm… yeah.

Haskell’s record system is outdated. In a universe of abstractions and minimally-constrained types, the monomorphic nature of records sticks out like a sore thumb. For example, there is no built-in way of saying “given a record of this shape, I will produce a record that is the same with this extra field”. Even having two records which share fields is difficult. Such construction is natural in many modern languages. This concretion is frequently used as a stick to beat Haskell programmers over the head with.

A number of libraries have been developed which extend or replace the functionality of built-in records. Each of these libraries is far superior to the default state of affairs, and that makes Haskell look bad.

If you are a learner, I recommend simply believing sensible record management to be impossible in Haskell until further notice. If you desperately need this functionality, see the libraries above.

Fingers crossed that the Haskell community can unify on one approach, at least enough to get built into GHC as a language extension or, ideally, to make its way into the Haskell Report.

I won’t hold my breath.

GHC uses a frankly astonishing amount of time and memory to do its job. It’s a known problem that some programs and libraries literally cannot be compiled on even competent hardware due to a lack of resources. In addition, long compile times are off-putting to people trying out Haskell for the first time.

Part of this is down to another known issue with Haskell libraries which is that some of them pull in the known universe as dependencies. pandoc is a good example of this. The upshot is using nasty workarounds or to simply give up and buy a more powerful machine.

But even so, it’s unclear to me why compiling a program which has a hundred or so files uses plural gigabytes of memory to compile. I’m not sure there’s anything we can do about this, because GHC is such a monolith, other than slowly improve its codebase over time.

To library and application developers, please stop depending on enormous libraries like lens and Cabal wherever possible. I do not think that a dependency on Cabal is required by almost any program, and lens can almost always be replaced with microlens, a minimal reimplementation designed with library devs in mind.

I have left out some pain points that people told me about while I was researching for this article. That’s not because they’re invalid, but because most of them are a product of the environment in which they were learning and might not be as universal as the things listed above.

None of these problems are insurmountable. Indeed, a lot of them are currently in the process of being fixed. But unless we can look each other in the eye and say that they exist, people will keep being turned away.

Below I’ve summarized the content above in a handy flash-card form for your convenience.

If you know of regular issues which come up and which I have not mentioned here, I’d love to hear about it. There’s plenty to discuss.